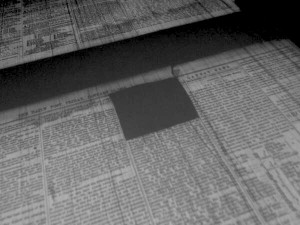 Well, perhaps we should say “Toxteth, we have a problem”. Like any heritage project, our team have encountered a few issues along the research route and we thought we’d share them with you and offer some reflections on how we are working with or around them! One of the issues that we’ve come across on our journey is the quality of some of the micro-films. For example a significant number are damaged or a very dark around the edges – this makes if difficult to read certain parts of the articles. It appears to be more the case with the earlier Daily Post micro-films than with the Echo versions. What this means is that we could miss an article that mentions ‘Toxteth’ or not be able to fully understand what the article was about because part of the story was missing or unclear. We’ve also come across newspapers in the micro-film that have had sections of them carefully cut out. We’d love to think that this was some form of censorship…that someone out there is censoring old newspapers from us, but the reality is probably be that the original newspaper that the micro-film version was taken from probably had clippings taken out of it. It got us wondering, what was so important on the clippings that people took them out? Was it stories about them, their friends or family? Were they important bits of news they wanted to keep? Or were they coupons or adverts for fantastic bargains? I guess we’ll never know for sure! In both of these instances there is very little that we can do in terms of getting better quality micro-film copies. All we can do is check out things on the online British Newspaper archive and hope that their copy is better.

Another problem that we’ve noticed when using the online British Newspaper Archive is that some of the titles they have noted down for the articles are either wrong or misleading. For example, the article title stated on the search result page may in fact correspond to the article previous to one that actually mentions Toxteth. We are currently noting these alternative titles down on our paper logs to make it easier for future researchers. Also, this online archive is throwing up a few anomalies. For example, although we are searching only for articles it does sometimes display the odd advertisement. These advertisements are not your usual types of advertisements…more like what we would nowadays refer to as an advertorial (a mixture of advertisement and editorial content). When we come across these we are also making a note of them on the database. We tend to think of advertorials as a new concept, but apparently they are not. Perhaps another great heritage project would be to look at the development of advertorials? Just an idea…but let’s get this project finished first!